A Homeless Refugee from Zimbabwe Finds New Opportunities Through Cooking

Every now and then the woman in the apron tinkles her glass to cut through the conversation, and all eyes at the table turn to her.

“Please don’t think there’s any question that is uncomfortable,” she says. “It is my duty to explain to someone who doesn’t know, and hopefully inspire a life.”

Seated midway down a communal table of 20, Tatenda Ngwaru is a commanding presence. She is here tonight to share her cooking from her native Zimbabwe and her story of struggling to survive as an asylum-seeker in New York City.

The event is part of a series of dinners called Displaced Kitchens, hosted by Komeeda, a company that designs events that allow diners to experience different cultures through food and storytelling. Refugees – dubbed “chefugees” – host each meal, joining diners to engage in conversation about their experiences as asylum seekers in the U.S.

The dinners also help the “chefugees” earn money to meet their urgent needs when settlement support from NGOs or the government falls short. At one past dinner event, Tatenda raised a couple of thousand dollars to pay her rent. Other dinners have helped some of the chefugees find jobs and affordable apartments.

“[Tatenda] was living in a shelter a few weeks ago,” says Nasser Jaber,  co-founder of Komeeda. ”She’s the one in need of the most immediate help.”

Tatenda worked as a caterer in Zimbabwe, and her events often feature her signature chicken stew with sadza —a Zimbabwean staple made from maize meal that’s similar in consistency to mashed potatoes. The bone-in chicken parts are braised with tomatoes, onions, and carrots. It’s a dish that summons strong memories of home.

“My father says he doesn’t make anyone cook chicken except me, so I wanted you guys to have that,” she told the diners.

Tatenda and guests at her dinner. Photo: Displaced Kitchens

Tatenda left Zimbabwe to escape the persecution she faced as an intersex person. People who are born intersex have both male and female anatomical features. At birth, she was categorized as a boy and was treated as one throughout her early years. But Tatenda knew better.

“I’ve always been a girl-girl!  That wasn’t even a question. My first crush was a boy… I liked dolls and nice dresses,“ she says, adding playfully, “You know, I’m pretty, which helps!”

When she had to undergo emergency surgery as a teen, doctors discovered her female internal organs. But Tatenda’s parents wanted her to continue pretending to be a boy. Rather than hide who she was, Tatenda ran away from home. She and her parents eventually reconciled, but her family’s acceptance couldn’t protect her from the discrimination she faced in Zimbabwe.

“People like me are not people. … Some say we’re the ones that don’t make the rain come,” Tatenda says. “You go to jail, or you get killed, or you disappear.”

Concerned for her safety, Tatenda’s father urged her to seek asylum in the U.S. But making the decision to leave home was just the first step in a journey that continues to be a struggle.

After arriving in Los Angeles in 2016 with only $60, Tatenda slept on the street outside an LGBTQ organization for two nights. Eventually a donated plane ticket helped her get to New York City.

Asylum-seekers must wait 180 days after filing their application to get work authorization, so she couldn’t legally support herself. And Tatenda found that organizations helping refugees could only do so much.

“They help with legal [matters]. … But when it comes to everyday life [not so much],” she says. “That was my first winter in New York. I have no winter clothes. I have never seen snow. And they don’t help with that.”

Over the next year, she sometimes wished she had a chronic disease because organizations serving those populations usually provide housing.

“I cannot stand cats, but I had to [cat sit] because I wanted a place to sleep for a week,” she recalls.

Tatenda finally has her work authorization and a Social Security number. She has a business degree and experience organizing for the intersex and transgender community. She’s hoping to leave behind the odd jobs she had to take to survive and apply for positions in policy work.

But so far, job hunting has been slow going. She still needs help to keep afloat.

“It’s very hard for me to ask [for help]. Every time I have to ask it makes me feel like I’m a prisoner,” she says. “It’s just that I really need it.”

Place the chicken in a large pot. Add 1/14 cups (300 ml) water and all of the salt. Partly cover and bring to a boil over high heat uncovered for about 10-15 minutes, or until the water has evaporated.

Add oil to the pot and brown the chicken over high heat for 5 minutes on each side.

When the chicken is brown add the garlic and ginger. Stir.

Lower the heat and add the onions. Cover the pot and let the onions cook until they are soft, for about 5 minutes.

Add the tomatoes and green pepper and stir.

After 5-8 minutes the tomatoes and pepper will have cooked, lower the heat and add the remaining water and the fresh cream. Stir and simmer on low heat for 5 minutes.

This recipe serves four people. Serve with sadza, a staple side dish in Zimbabwe. 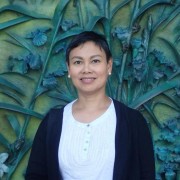 You Can’t Have Your Hummus and Hate Arabs Too