An Immigrant Telenovela from New York: ‘We Have Come to Take Your Jobs’

A scene from the Escandalo video "Nocturning" directed by Viva Ruiz and screened at MoMA PS1.

Described as a “horror disco novela,” Immigrantula is a short film about the struggles of undocumented immigrant workers who have come to America to find work, but without green cards they are subject to a life without protection or rights.

The film was part of the performance art show ‘We Have Come to Take Your Jobs’ by multimedia artist Viva Ruiz billed as a”pro-immigration invocation sensation.”

The arty documentary style telenovela is in both Spanish and English and begins with young immigrants telling tales to each other – like ghost stories around a campfire – about how they came to be in America.

They are hiding in the back room of a bar when immigration officers turn up to check their identity cards. To the officers’ surprise, they are confronted with a humorous couple; a woman with an American I.D. and her gay immigrant husband. Unable to take any action, the officers warn the couple that they are being watched and leave. The film then takes a comic book horror turn, when later that night the group of young people captures one of the immigration officers in a web and he becomes a victim of the dreaded Immigrantula spider.

As an ‘EcuaYorquina’, (first generation Ecuadorian) Ruiz’s work centers around the intersection of diverse cultures. Her medium is the “telenovela,” taking the genre of Latino soap operas as her jumping off point. Her latest, Immigrantula, premiered to a crowded audience at MoMA PS1 on April 30, against an exciting backdrop of Latin club culture with dance music, drinks and flower shaped mangoes to feed all the senses.

Following the film premiere at PS1, the Immigrantula and other characters came on stage for a costumed dance performed by the Latin art-house group Escandalo. Ruiz described it as a prosperity ritual for all who have stolen across or who are currently stealing across borders in search of a better life.

Viva Ruiz is a film maker, singer and dancer, who sings in the band The Crystal Ark. Fi2W’s Dimple Patel spoke to her about her strong pro-immigration views, what has influenced her and how cross-culture is expressed in her art.

DP: There was a bit of everything going on at PS1—music video, dance, club vibe, performance art. What was the idea behind that?
VR: There was a lot going on! One of the things I wanted to create was something like a family party where everyone turns up and there is a bit of everything. I decided on the mango as a representation of food. In New York, Mexican ladies have street food stalls selling sliced mangoes shaped like flowers on sticks, so I had hundreds of them – but they were gone, really fast! Food is so important at any gathering in my culture. So it was a party, celebration is a really important aspect for me.

Is immigration always the focus of your work?
This is the first one specifically about immigration but I have made telenovelas before and there is always a cross over of cultures in my work. I love the structure and genre of novela so I kept the essence of that, but made it about NY underground club life. More than immigration, integration is a consistent theme for me. The music I’m making now with my band The Crystal Ark, I sing in Spanish which changes the context and I have another audience I’m speaking to. Its a snapshot of NY, where Spanish is spoken just as much as English. You can definitely get by here without ever learning English. In NY you can live in your cultures, obviously they are affected – its not like living in Ecuador, but its a beautiful thing that you can be true to values or traditions that you grew up with. You can be in your neighborhood and still feel the connection to your homeland, that’s very special. … I feel like NY is an incredible experiment; if we can make it work here with so many religions and traditions living side by side, then we can make it work on a huge scale. I’m in love with New York!

New York is often described as a ‘City of Sanctuary’ for immigrants. Obviously you are supportive of that idea, why do you feel so strongly about that?
Yes, I’m sure there are a good amount of people who feel the same as people do in other states, but we are a hub and you really can’t avoid and live in a vacuum. This really is a city of immigrants and the reason I wanted to make something about immigration is because things are really scary right now. With the things happening in Arizona I feel like racism and xenophobia is at fever pitch. That is the Bush legacy, after everything broke and now there is no middle class, people are in hard positions. The enemy in the country is no longer Osama, especially now, but now the enemy is the immigrant. Somehow there is a skewed logic that it’s the immigrants fault, as if it’s a hunt. That to me is very sinister and scary because there is a momentum to that. The thing about ‘they are taking our jobs’ really resonated with me because people are hungry, people are looking for jobs, things are worse and the rich are getting richer. There are serious problems economically but it seems insult to injury that the lower class who have no protection are being blamed. It’s such a cruel joke that the poorest would be the enemy!

The whole idea of I.D cards is shocking to me, it’s so racist and wrong that people in the United States can be stopped in the street based on what they look like. … In this country made of immigrants, to me, the idea of I.D Cards and what is happening in Arizona is alarming, shocking and disheartening.

'We have come to take your jobs' prosperity ritual performed at MoMA PS1.

Was the live prosperity ritual performance influenced by anything? It had a tribal feel.
A couple of months ago, one of my best friends passed away, she was a very powerful activist and a transgender woman. She was a long term AIDS survivor and she made a lot of noise while sick throughout all of it. She did a lot of great things and affected so many people. She was Wican and very connected to Native American tradition. … When I was creating the invocation for our immigration ritual, I wanted to open the gate and erase the borders of the world for people to feel for a moment what it might be like to belong to one nation. I felt her blessing in that, she was fearless and there is fear in towing the party line especially when you are the hunted.

To me its very personal. I feel an allegiance to the hunted because I’m the first one here. My people are from other places so its very personal when I know that all they came to do was work. Working 14 and 20 hour days for less than minimum wage is still better than where they came from. So my intention was to say words that protected them on their journey here and build their wealth with our energy because they are not the ones stealing from us. People don’t see their families, they can’t go back to the country when their parents die because they have no papers, there’s so much sacrifice.

I’m going to do my best to elevate and celebrate these people because I feel that’s what’s missing, I hear a lot to the contrary. It’s not about revenge, we came to take your jobs, it is antagonistic but you hear so many voices with that message so I wanted to be one person to say ‘ok, I came to take your job,’ which shocks people! It’s not what I believe, but it was an experiment for me to embody that and turn it around. 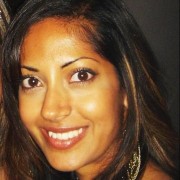 Dimple is a producer for BBC Local Radio in the East Midlands, England. She works with the U.K.'s biggest volunteering and training charity, Community Service Volunteers, producing media campaigns which focus on social action and raising awareness of local issues. Dimple is British, of Indian heritage. She is a culture vulture.

Thanks to Facebook, Filipino Immigrants Had "Front Row" Seats for Pacquiao-Mosley Fight