There was a familiar anxiety that ran through the Muslim community after the identities of the Boston bombers were revealed in late April. People worried about a spike in retaliatory violence against Muslims across the country.

Since the September 11th terrorist attacks, anti-Muslim hate crimes have been on the rise. Crimes targeting Muslims soared by 50% in 2010, skyrocketing over 2009 levels in a year marked by the incendiary rhetoric over the so-called Ground Zero Mosque proposal in lower Manhattan. It was the highest level of anti-Muslim hate crimes since 2001, when the FBI reported 481 anti-Muslim incidents.

At the same time, the 2010 U.S. Religion Census showed Islam was the fastest growing religion in the U.S. over the last 10 years, with 2.6 million Muslims living in the U.S. today, up from 1 million in 2000. In New York City alone there are now nearly 200 mosques.

Ateqah Khaki, a 29 year-old artist and activist, uses her art to address these trends. She created the online multimedia project ‘The Call to Prayer’ to highlight the everyday life of Muslims and to encourage dialogue about Islam. She found a creative spark in the Boerum Hill neighborhood of Brooklyn where there is a mosque that Ateqah documented over the course of four months.

For Ateqah, the location is significant. “The mosque I recorded is five minutes from Target, the Barclays Center, and every single train that comes in to Atlantic Avenue. But there are also all of these Middle Eastern grocery stores, but then a Bank of America. The neighborhood really represents all of these different worlds that intersect,” she said.

The Al-Farooq Mosque in the Boerum Hill neighborhood of Brooklyn and surrounding sidewalk. (Photo: Ateqah Khaki)

“I am intrigued by the idea of depicting the mundane or every day or the ways in which Islam coexists in New York and this project is an example of that,” Ateqah adds.

At the project’s website, visitors can DJ their own audio and visual experience by selecting from the many recordings of the call to prayer and videos of the neighborhood. The goal is to recreate online how one may feel hearing the call to prayer, and find out more about its meaning and history.

Ateqah has a personal connection to this issue. Her parents, of Indian heritage, were arranged to be married in Tanzania. They immigrated to the United States when she was 2 years old. They settled in Seattle where Ateqah remembers being the only brown-skinned kid in her classroom. As is common for children of immigrants, Ateqah had the desire to choose a predominant identity. She decided to identify most with her Muslim religion, which was tested on her first week at college.

“A week after [my parents] dropped me off, I turned 18 and a week after that 9/11 happened,” said Ateqah, who recalled how the aftermath of 9/11 influenced her to follow a career path focused on social justice. She explained that the hatred towards Muslims following 9/11 inspired her to work with lawyers that represented men held in Guantanamo Bay, who help challenge illegal surveillance of Muslim citizens, and work with the ACLU. It also inspired her as an artist.

“What influences me as an artist are really three things: caring, creating, and connecting…this is what ultimately led me to do this project,” said Ateqah. 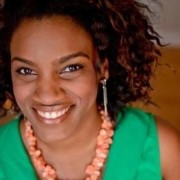 The question that always leads Carmel is "How can I serve my community?" Carmel has nearly ten years of professional experience in the areas of international development, HIV/AIDS education, and social marketing. She has done her small part to shed light on the HIV/AIDS crisis in the U.S. and abroad, address the plights of street children in Uganda and Ghana, and help rebuild homes in New Orleans post-Katrina and New York post-Sandy. She loves kitchen table conversations with her grandmothers in Cleveland, Ohio and has a slight shoe obsession.

Judge Lorna Schofield: ‘I had no Filipino consciousness growing up’