Building a “Culture of Engagement” Among Asian Americans with Music, Social Media and an App

“I’m a media justice campaigner,” says 24-year-old Mark Tseng Putterman. “I try to mobilize our members to speak out around issues that relate to internet, technology, privacy surveillance and access.”

The 21 million Asian Americans and Pacific Islanders in the U.S. represent the nation’s fastest growing demographic group. Projections are that four percent of voters this year will be members of this diverse community.  Yet voter turnout remains low. Through his work with 18 Million Rising, an organization that seeks to promote AAPI civic engagement through technology and social media, Tseng Putterman helps his community become more involved in U.S. politics.

Their work around the election includes a social media campaign called #MyAAPIVote and a voting app called “VoterVox” that provides translation assistance.  As a Chinese-American, Mark says the upcoming presidential election “feels like a reckoning, like a pivotal moment for American politics and race relations.”

Mark’s story is part of a series of profiles of young immigrants from across the U.S discussing their perspectives on the 2016 election.

This conversation has been edited for clarity and length.

Tell me what exactly you do at your job.

Through an Asian American and racial justice lens, I think about how things like government surveillance, corporate surveillance impact Asian Americans. I also think about the ways that the internet can operate as a platform for Asian Americans other than immigrant folks and people of color in order to be able to access information. Information that’s relevant to their experiences and also share their stories, share their politics and identity in ways that more top-down media institutions don’t always allow for.

Can you tell me more about the organization you work for?

We have been working on a number of projects related to building Asian American power as an electorate. Last month, we released a mixtape album called Voices of our Vote, which was a compilation of 32 different Asian American artists performing songs that they have written having to do with Asian American empowerment in general. In addition to that, a big project that we are working on is an app called “VoterVox”. That’s an app that is designed to connect limited English-proficient voters with bilingual folks in their community to help walk them through the ballot process and have a face-to-face opportunity to participate in the voting process and sort of build a culture of engagement in the immigrant community, who are often excluded in the face barriers in that process.

Asian Americans have a low turnout rate, what barriers to voting do you think exist for them?

One the biggest barriers that we are trying to work on is language barriers. There are a lot of sort of intricate rules regarding the number of people of a certain ethnic background or language background that need to be in a certain district in order to legally mandate that ballots be translated. And so even though the Voting Rights Act of 1965, in theory, mandated that voting would be language-accessible to all Americans, regardless of what language they spoke (or) preferred to use, in reality there are a lot of folks who are being left out of the process because ballots aren’t being translated and voting outreach isn’t being done in their language of choice.

What issues are the most relevant for you right now?

The most hot topic issues that are impacting Asian American communities have to do with immigration, xenophobia, and Islamophobia. But I think there’s a wealth of issues that impact Asian Americans that are sort of on the table in this election cycle. I think that things like foreign policy, trade policy and US militarization in Asian-specific regions, is a huge issue that directly impacts many of our families in our countries of origin and that’s something that’s not as talked about in Asian American communities, but definitely something that Hillary Clinton or Donald Trump’s policy would make a huge impact on. 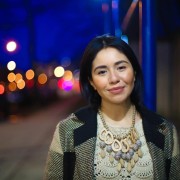 I'm a filmmaker and founder of the blog Sonic Feminista - a platform that challenges the idea of who a feminista is supposed to be by producing videos that allow them to define themselves.

A Revolution Against the Establishment: A Latino Millennial on His Support for Donald Trump