The first in a week-long series on the 2010 Census and immigrant communities.  This article was written for Feet in Two Worlds by Rong Xiaoqing, a reporter for Sing Tao Daily in New York.

Pan, a volunteer at the event held on March 27th, explained to He what the census is all about and why she should fill out the census form. “You know this year we got several Chinese elected officials. This is the time to show the government we have a big population and we are no longer invisible and voiceless,” said Pan.

Since the campaign to educate people about the importance of the census began a few months ago, tying the increasing awareness of political power in the Chinese community with the census has become a major strategy here.

New York City’s census mail-in rate may be lower than the national average, and immigrant communities may be among the hardest groups to count, but in Chinatown there is at least one difference this time around. In 2000, when the last census was conducted, there were no Asian elected officials in the city – now there are four.

All  are Chinese, including the city’s Comptroller John Liu, the first Asian elected to a citywide office, Council Member Margaret Chin from Chinatown, and Council Member Peter Koo and Assemblywoman Grace Meng both from Flushing.  Liu, Chin and Koo were elected to their positions only last year. In the key primary elections, the turnout by Asian voters reached 17 to 18 percent of the Asian electorate, compared to an average of just 11 percent for the general population. Asians also made up 7 percent of all participating voters in the general city election, more than double the figure in 2001.

The census comes at a time when the excitement and enthusiasm these victories brought to the community are still fresh, offering community organizers better leverage. “It’s definitely easier to promote the census after last year’s election. People have seen the changes we made by uniting and mobilizing the community. Now the census is more like a follow up step to push it even further,” said Christopher Kui, executive direction of Asian Americans for Equality (AAFE).

This year AAFE was one of  a half dozen community organizations that formed a coalition in Chinatown to jointly assist people with the census. Politicians are also trying to help, providing good role models for what can be achieved through participation.

A young resident of NY’s Chinatown shows off her census stickers.

“We’ve been talking about how it’s important to vote a couple of times a year, in the primary and the general elections,” Liu told his Asian followers at a census promotion forum. “The census is once every ten years. And it’s an absolute minimum. I completed my census form in five minutes. That’s all it takes. Everybody should fill and return those forms,”

The tactic seems to be effective. Although formal statistics are not available yet, community members have seen an unprecedented interest among residents. Johnson Lee, a voter registration activist and community specialist for the census (this is the fourth census he has been involved in) sees a parallel trend with voter registration. “Before, you have to chase after them to push them, and now many people come to our office by themselves asking for help in filling out the forms. This is a big difference,” said Lee.

While growing political awareness is helping the census drive this year,  the Chinese community has already seen how the census count has helped to shape its political power in bitter and joyful ways.

The 22th N.Y. Assembly district in Flushing was created as a result of redistricting based on the 2000 Census. In 2004, the district, where more than half of the residents are Asian, elected Jimmy Meng as New York’s first Asian assemblyman. Since then the position has been held by a Chinese person, next by Ellen Yang and now by Jimmy’s daughter Grace Meng.

But Chinatown is a different story. Community leaders hoped the 1990 Census would allow the neighborhood to become its own city council district. But the return rate in the area was only a little more than 30 percent. The current Council District 1 stretches far beyond Chinatown to Washington Square and the Financial District.

“If everyone had filled the form at that time, Chinatown might have been represented by a Chinese council member a long time ago,” said Chin, the first Chinese person to represent the district in the city council. She initially campaigned for office in the 1980s and finally succeeded in being elected to represent the larger area last year. “But more importantly, the constituents’ interests will be better taken care of in a smaller district,” she added.

This time, people are again hopeful. “If we have enough population in Flushing, Chinatown, and Eighth Avenue in Brooklyn, these neighborhoods may be redrawn into one congressional district.  If so, we may get the first Chinese congressman from New York soon,” said Lee.

Events like the Chatham Square gathering, where volunteers helped more than 100 residents fill out the forms, have boosted such hopes. Take the case of Zhaocun Yang, a 57-year-old restaurant worker who came to have the form filled out only a couple of hours before he flew back to China to visit his family.

Yang, who speaks little English, couldn’t even pronounce the English name of his two-year-old niece who came along with him. But he knows all the Chinese names of the Chinese elected officials.  As a new citizen, Yang hasn’t voted yet. But he said he will this year. “I want to elect more Chinese officials so they can help people like me,” he said.

Editors note:  Chinese is one of the six official languages of the 2010 Census.  Later this week we’ll have reports on immigrant New Yorkers who can submit census forms in other official languages including Russian, Korean and Spanish.

The Feet in Two Worlds project on the Census is made possible thanks to the generous support of the 2010 Census Outreach Initiative Fund at The New York Community Trust and the Laurie M. Tisch Illumination Fund. 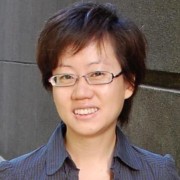