For Sanne Ytting, culture, psychology and the culinary arts naturally fit together. Sanne  moved to New York from Denmark 14 years ago, working as a psychologist for most of that time. Two years ago she decided to make a major career change and opened  the city’s first traditional Danish restaurant.

“I began to play around with the idea of creating a piece of Denmark in Manhattan,” she said, describing the concept behind her restaurant Aamanns-Copenhagen. “Because there were no restaurants, there were no places I could take my American friends and introduce them to what I love from my homeland.”

Initially her plan wasn’t to open a restaurant, but to create a space where New Yorkers could have the feel of Denmark, as well as a small home away from home for the city’s Danish community.

Located in Lower Manhattan, Aamanns-Copenhagen lights up the neighborhood with writing on the brick walls stating that this is a modern cultural hub. Walking into the restaurant you immediately recognize the Scandinavian style. The architecture and design is light, and clean. The staff, a mix of Danes and Americans, are eager to educate visitors about Danish culture and cuisine. Even the bathroom offers insight into Danish tradition and history. The wall is covered with framed images and artifacts including a picture of the Crown Prince and Princess of Denmark.

“I am of course very happy when I have Danes come in and they say that it feels like being in Denmark,” Sanne said.  “But I get almost even more moved when it’s someone from Japan or the Midwest or New York coming in and they love the place and the food.”

The restaurant specializes in smørrebrød, the best of what Danish cuisine has to offer in Sanne’s opinion. The dish consists of a single slice of bread with one or more food items on top. “It is healthy and pretty. It has so many layers and different flavors that you add to it and there are a lot of different things you can make to cater to people’s taste,” Sanne said.

But it’s not just the toppings that make these dishes unique. It’s the bread. Danish rye bread–rugbrød–is rich in whole grain and dietary fiber, contains no sugar, and is considered by many Danes to be a healthy alternative to whiter types of bread. According to researchers, people from Denmark are known as the happiest people on Earth, a finding that was highlighted when Oprah visited Copenhagen in 2009 to find out why. One thing that she discovered was Danish rugbrød. “I so love it. I have a slice every morning. It’s like eating earth.”

Over the last decade, the new Nordic cuisine has revolutionized Danish gastronomy, creating a new focus on local ingredients and leading to a renaissance of classic Danish dishes, such as smørrebrød.  Sanne is convinced that more Danish restaurants will open in New York in the near future. “I know people make fun of me, but I have always said that smørrebrød will become the new sushi!” 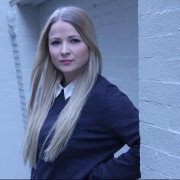 Helle Andersen was born and raised in Copenhagen, Denmark, and has lived in New York since 2011. Helle graduated with a Professional Bachelors degree in Media Production and Management from the Danish School of Media and Journalism in Copenhagen, 2010. She is currently a graduate student at The New School for Public Engagement with a Master of Arts in Media Studies.

It's Tax Season, Even for Undocumented Immigrants