D.C. Inauguration Photos From Around The Web

Here are some Inauguration pictures, taken this morning in D.C., from around the web. We’ll keep adding more through the morning. 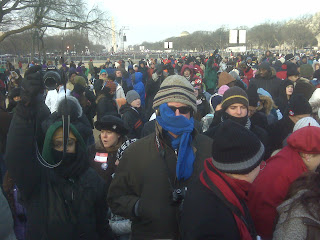 Cold in D.C. A teacher blogs the inauguration for his Iowa students. (jcummer.blogspot.com)

In a sea of (unironic!) flag-waving. (Angelan/Brightkite)

Minutes after Obama's swearing-in, the new WhiteHouse.gov had been published. The crowd on The Mall (sdean8/flickr)

Today They Celebrate, Tomorrow They March For Immigration Reform

Advocates Hopeful About Immigration Reform Under Obama, Maybe Even In First Year