New Jersey DREAMers call for tuition equality for undocumented students at a rally in front of the State House in Trenton. Photo courtesy of Giancarlo Tello

One year after the Obama administration began offering a reprieve from deportation to young undocumented immigrants, nearly half of those believed to be eligible have applied to the program.  But a report by the Migration Policy Institute (MPI) estimates that out of the 1.9 million undocumented immigrants in the United States under the age of 31, only 57 percent meet the program’s age and educational requirements.

The program known as Deferred Action for Childhood Arrivals (DACA) was created to allow unauthorized immigrants ages 15 to 31, who entered the United States before the age of 16 and who turned 31 before June 15, 2012 to apply for a two-year deferment of deportation. Applicants must be able to verify that they are in school, have a high-school diploma or are enrolled in an authorized adult education or career training program working towards a GED, postsecondary education, or job training.

According to MPI more than half a million applications were received in the first year and around 75 percent (400,562) were accepted, 1 percent (5,383) were denied and the rest are in the process of being determined.

Of those who are ineligible for DACA, the MPI report notes that they face several barriers.

In addition to lower educational attainment, these youth have lower English proficiency and lower incomes than their currently eligible peers.  Such youth are also more likely to have work and parenting responsibilities that may affect their ability to enroll and stay in education or training.

The report also notes that nearly 400,000 additional undocumented youth who are under 15 may become eligible for the program once they are old enough to apply.

MPI hosted a video conference last week to discuss their report. MPI analyst, Jeanne Batalova, said that after looking at school enrollment of those eligible to apply for DACA, the study found that 30 percent are currently enrolled in college or already have at least an associates level degree.

“For this population having no pathway to legal employment in the mainstream economy will bring disadvantages not only to these individuals but also to the economy of the communities in which they live,” Batalova said.  “We already have a substantial number of people who are pursuing education in one way or another either in secondary or post-secondary level, so the loss of human capital the brain waste of this population will have negative implications for the economy overall,” she added.

The report says the largest number of potential DACA recipients live in four states – New York, California, Texas and Florida.  But the states that have seen the highest percentage of applicants are North Carolina, Georgia and Illinois.

In addition to deferring deportation, DACA recipients can receive work authorization and, in most states, a driver’s license.  Some states also offer in-state tuition rates to public colleges and universities. The application fee for DACA is $475. 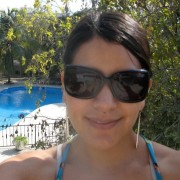 Angela is a multimedia producer who is curious about the world around her and loves to portray that through aural and visual storytelling. Traveling as close as her own neighborhood or trekking internationally, she loves the art of the travel, which enables her to meet new people and hear their stories.

Video: Daughter of Deported Jordanian Immigrant Travels to Washington to Advocate for Reform