Despite criticism by store owners, street vendors argue that they don’t compete directly with small businesses, since they are not selling food to those who can afford to eat at restaurants. Long-time vendor Heleodora Vivar  says people who buy from vendors are generally working class immigrants who can’t afford more than a two-dollar taco for lunch.

Co-produced by Maria Villaseñor, a multimedia reporter based in New York City.

Feet in 2 Worlds coverage of street vendors is part of Street Food: Meet the People Who Make It, a partnership with Oakland Local and In These Times. It’s supported in part by The Media Consortium and the Voqal Fund. Join the conversation about street vendors across the country at #FOODUNDOCUMENTED. 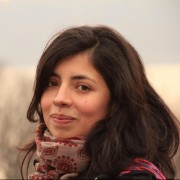