Dreaming of Damascus – The Fi2W Podcast

Yarra’s snapchat of her ticket to see Nassif Zeytoun— a popular Syrian singer who performed in New Jersey.

When Yarra left Damascus it was the gloomiest day she had ever seen. “It was incredibly hard to look at the city while leaving. The sky was filled with smoke… the streets were empty,” she recalls.

That was four years ago. Yarra and her family – refugees from Syria’s civil war -were granted asylum by the U.S.  They settled in Jersey City, New Jersey.  Today Yarra and her family struggle to create a sense of home in a place where they didn’t choose to live and despite efforts by the Trump administration to impose a Muslim travel ban that includes visitors from Syria.

Yarra agreed to share her story with producer Mimi Everett.  She also kept an audio diary, revealing her world of longing, memories and new beginnings.

Listen to her story 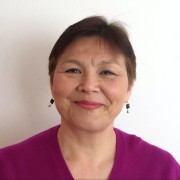 Mimi Everett was born in Tokyo, raised in Seattle, and is a proud New Yorker. She is currently pursuing her Master’s degree in TESOL (Teaching English to Speakers of Other Languages) from The New School where she graduated from the CTE (Certificate in Teaching English) program. She worked for many years in Film and TV production before choosing to become a teacher.