Driving Without a License, Immigrant Workers at Risk

In this series, produced for WCAI, Sarah Reynolds brings together voices and stories of the immigrants in the coastal towns of New England–looking at why they have come, why they stay and the struggles they face.

Under Massachusetts law, Celia Alves is not allowed to drive here because she is in the country illegally. But she says she has no choice. She needs to drive in order to survive.

When Celia Alves first gets in her car to drive home after a long day of work she prays.

“Dear God,” she began, “I want to say thank you so much for this beautiful day and for your protection…”

Alves is not a nervous driver. She’s been driving a long time – for 24 years – most of those years on the Cape and in her native Brazil before that.

Six days a week, Alves leaves her house in Barnstable and drives from one client’s house to another, cleaning houses. She’s been doing it for 13 years. She can’t work without her car, she says. There’s no efficient way to get from town to town without driving. She’s been driving for 24 years, most of those years on the Cape and in her native Brazil before that. But she doesn’t feel 100% free.

Supporters of the Safe Driving Bill at a press conference in front of the Massachusetts State House; photo: Safe Driving Coalition

Alves doesn’t have a driver’s license. For years, immigrant advocates around the state have been fighting for legislation that would allow people like her to get one. With few exceptions, people who live and work in the state but don’t have a valid Social Security number or visa are not eligible for to apply for a driving license. Opponents, like Barnstable County Sheriff Jim Cummings, say immigration reform is in the hands of the federal government, and it’s dangerous for the states to undermine that by extending privileges li­ke drivers licenses.

“It almost seems like we’re providing another means — but for illegal people — to continue being illegal,” he said. “And I’m totally against that. Unless the federal government changes the law relative to immigration, our obligations are to enforce those laws.”

For Alves, driving to work and buying groceries are basic needs. Licensed or not, she doesn’t see any other choice than to get behind the wheel.

Alves and her family moved to the States from Brazil after their daughter died in a car accident. Her husband lost his job, they started taking on debt and they knew the way things were going in Brazil, they wouldn’t be able to afford to send their son to college. America offered an opportunity so they applied for tourist visas and came to the US in 2001 when their son was 12 years old.

Their plan was to work for three years, earn the money they needed, and then return to Brazil. But after a few years, with their son in school and their cleaning business going well, they decided to stay. Eventually, their visas expired and they were no longer authorized to be in the U.S.

When Alves first came to the Cape, she had a valid Brazilian drivers license, a Brazilian passport and tourist visa. She used this when she first got insurance and registered her car. But in Massachusetts, it’s very difficult to get insurance and registration if you can’t prove you’re in the country legally.

Eva Millona, the executive director of MIRA, The Massachusetts Immigrant and Refugee Advocacy Coalition, says that this driving bill is important for all residents.

“It’s a bill that really addresses the safety of all those who drive in our state to have a drivers license and be insured. It allows all drivers to learn our traffic rules, it increases family mobility, supports our economy, and most of all, you know, saves lives. We want every driver who is on the streets to be tested and to be insured,” she says. MIRA is one of the organizations leading the fight to pass this bill as part of the Safe Driving Coalition.

The Massachusetts Registrar of Motor Vehicles also supports the bill, saying it would increase state revenue by several million dollars and would reduce the drain on law enforcement and the court system. Eleven other states have passed similar bills, including Connecticut and Vermont. Here in Massachusetts, the legislative effort failed to make it to a vote this year, though supporters say they plan to re-file it before the end of the session in December.

Celia Alves hopes the bill will pass. She says having a license would not only make her feel better when she drives, it would also give her renewed confidence. She would have an ID, a valid identification to prove who she says she is.

“I don’t have a green card and I’m not… an official citizen, but I’m feeling citizen because I do my part. I pay my tax. I work hard. I help people,” she said. “Everything that citizens do, I do. I just don’t have a document to take my driver license.”

While driving without a license, Alves is always at risk of being fined or arrested if she’s caught. But she’s willing to take that risk. And Cape Cod is home. Her son graduated from UMass Amherst this summer. She and her husband are saving up to buy a house. And she’ll continue driving to work, hoping that one day she can do it with a Massachusetts license. 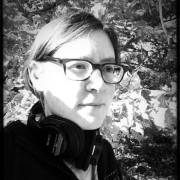 Sarah is a radio producer, multimedia storyteller and investigator. She produces and reports for NPR, which often includes the production of supporting multimedia pieces. Her investigative and reporting work, for radio and for national non-profits, has covered subjects as diverse as the housing crisis, hate crimes and migrant workers, some of which has culminated in published reports and multimedia series for national organizations working to change policy. Visit her website sarahpreynolds.com.

"To immigrate is to experience a chasm" - Reflections of a Rabbi