Pausing to take a break in front of the bottle recycling center on 62nd street, between 6th and 7th Avenue, in Sunset Park, Brooklyn. All photos: Janie Shen

Every morning in Sunset Park, Brooklyn Chinese grandmas and grandpas stream towards the recycling center on 62nd Street. They carry bags or drag carts overflowing with bottles and cans they have collected over the course of days or weeks. For each redeemable bottle or can, they receive 3 cents.

People who collect bottles and cans for recycling are a common sight in New York City. It’s work that provides an income for New Yorkers with few other job options. In Sunset Park what is striking is the number of elderly Chinese immigrants who undertake this work.

While the first Chinese immigrants to settle in Sunset Park were Cantonese, since the 2000’s an increasing number come from Fujian province in Southeast China. Many older Fujianese immigrated together with their grown children, arriving in New York City without knowing a word of English.

Back in China, they were farmers. They spent their days toiling away on the land, and are used to hard work, or ku gong (literally, bitter labor).  In Brooklyn there is no land to cultivate and no jobs to be found. Many take on the role of caregivers for the young and old in their families and to cook and clean. Yet for some, who’s children have left the city for jobs in other states, even this role remains elusive. They are alone and lonely. Rather than staying idle, they turn to recycling to fill their days. Collecting bottles and cans is a way for them to be productive, and a practical way they can contribute to their family’s income and not feel like they are a burden to their children. For these grandparents, every bottle counts.

Photographer Janie Shen spent months getting to know some of the grandmas who recycle and produced this photo essay.

The quotes in the captions have been translated from Mandarin.

Mrs. Ning on her way to recycling, proudly shows the top bag of her cart. This bag contains over 600 bottles and cans. At 3 cents a bottle, she can make about 18-20 dollars. She moved to New York three years ago from Fujian, China . Her husband has a physical disability, so she stays at home and takes care of him and collects bottles and cans when she can.

Grandma Cheng stands outside the recycling center. Cheng moved to New York 10 years ago from Fujian, China. She has a daughter and son and three grandchildren, but none of them live near her. Her son works in Virginia, in a restaurant and also drives delivery vans. She worries about her son, “He’s often sick, and still has to work day and night,” Cheng said. She feels a lot of guilt that she is unable to take care of her grandchildren, a role most Chinese grandmothers are expected to take on. She also complained that she is not a good cook, being number five of seven siblings meant her older sisters did all the cooking. “Even at my age I still don’t know how to make zhongzi (sticky rice wrapped in bamboo leaves for special occasions).”

“It’s a tough job, my hands have bruises, and it’s smelly. My kids don’t want me to do it. They are ashamed. But they are working so hard, their lives are hard. I want to do whatever I can do to help,” said Grandma Cheng. She relies on her children for support. She started collecting cans 3 or 4 years ago. She writes down the number of cans she has collected to remember and make sure that the recycling center does not miscalculate the numbers.

The shrine inside of the Fujianese Buddhist temple close by on 7th Avenue.

Grandmother Chen feeding lunch to her almost 3-year-old grandson. She immigrated from Guandong, China to New York about ten years ago. She has always worked as an elders’ aid, and now she takes care of her grandson. When she has time, she collects cans and bottles. “There’s nothing to be ashamed of. You’re working, not stealing. It’s good to be out. We have to think, plan strategically where to go, and what time. You use your brain and exercise.”

Inside the bottle recycling center on 62nd street, between 6th and 7th Avenue, in Sunset Park, Brooklyn.

This story is part of the photojournalism class at The New School taught by Glenna Gordon. 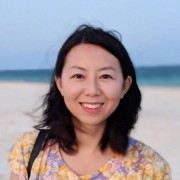 Fi2W on NPR's The Salt: For Many Caribbean Immigrants, It Wouldn't Be Christmas Without Black Cake

Call for Story Pitches: After the Storm - Tracking the Puerto Rican Exodus