Food in 2 Worlds Podcast: The Treats Truck Offers the Flavors of Passover and Much More

The explosion of food trucks in the city has provided New Yorkers with many new options for snacking on four wheels, and a lot of them involve dessert. One of those is Kim Ima’s Treats Truck, which she launched in 2007.

I spent a day with Kim when the truck was parked near Sixth Avenue on 20th Street in Manhattan. Customers were lining up, smiling, peering in, and trying the samples she offers:  tiny pieces of lemon bars, pecan butterscotch bars, chocolate truckers (chocolate cookies with butter cream), and other delicious bite-sized treats.

Listen to the Fi2W podcast about Kim Ima’s Treat’s Truck:

Subscribe to the Fi2W podcast on iTunes or Podbean

On both sides of her family there are strong food memories, both good and bad, of reinterpreting “American” food into a hybrid culture, and those stories have affected her relationship to food.

Kim’s father and his relatives were Japanese Americans forcefully interned in Minidoka, Idaho, during World War II and Kim’s grandfather was a cook in one of the mess halls.  “They had to work with whatever food they had.  Some of it was okay, some of it was not so okay.  There are certain things they will not eat because of the memories from that time period,” she explained.

In a nod to her Japanese heritage, sitting next to the cash register there is a white statue of a Japanese “lucky” Maneki Neko cat with its left paw raised. “I just always grew up with businesses having a beckoning cat for good luck and prosperity and to me that’s just as much a part of who I am as anything,” she said.

Kim learned to bake with the female members of her maternal family, particularly during the Jewish holiday of Passover.  One of the recipes she learned from them was the apple Passover cake, and it became a foundation of the Treats Truck. Even outside of the Passover season, Kim sells traditional Passover treats such as macaroons, apricot squares, and apple Passover cake alongside cranberry Rice Krispy treats and chocolate chip cookies.

“A lot of people like it on the truck and they don’t even celebrate Passover.  Some people say, “I just love that apple cake” and I say it’s for Passover they say, ‘That’s fine, just give me a slice.’”   So now Kim carries apple Passover cake, macaroons and apricot squares every day.

Here’s the recipe for Kim’s apple Passover cake from From The Treats Truck Baking Book, HarperCollins, 2011:

2 To make the cake, in a large bowl, whisk together the eggs, oil, and white sugar.  Stir in the matzo cake meal, potato starch, and cinnamon.

3 To make the filling, in a separate bowl, toss the apples, brown sugar, cinnamon, and nutmeg.

5 Pour the rest of the cake mixture on top.  Sprinkle with brown sugar.

Fi2W is supported by the New York Community Trust and the John S. and James L. Knight Foundation with additional support from the Ralph E. Odgen Foundation, the Mertz Gilmore Foundation and the Sirus Fund.  Fi2W podcasts are supported by WNYC, New York Public Radio and the CUNY Graduate School of Journalism. 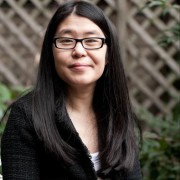 Theresa Loong is an award winning filmmaker and interactive media professional whose work has been exhibited at the SVA, Sala de Exposiciones, Teriennale di Milano and Circulo de Bellas Artes. She and artist Laura Nova are collaborating on a transmedia project called Feed Me a Story, that encourages the sharing of secret family recipes in a documentary style video cookbook and Web application. Theresa has worked on public television programs such as “So Very Far from Home” and “China Now: To Get Rich Is Glorious.” Her upcoming documentary film, “Every Day Is a Holiday,” will air on PBS stations this spring. Theresa also specializes in the editorial and strategic development of integrated media projects. She has taught multimedia at NYU's School of Continuing and Professional Studies, and is on the board of directors of The FilmShop.