Across the nation, there’s growing demand for Mandarin instruction for both Chinese immigrant students and kids who speak English and Spanish at home. Fi2W Reporter Lan Trinh filed this report about a public elementary school that has initiated a dual language Chinese-English program in New York City.

I’ve spent much of the past few months researching and filming dual Mandarin-English classes in New York City public schools. I’m truly inspired by what I’m seeing, and envious. While I’m aware that New York City is more diverse than many parts of the country, I do feel America is shifting towards embracing multilingualism, a welcome contrast to when I first came to this country.

When I arrived in America at the age of 10, I barely knew the English alphabet. As an ethnic Chinese person growing up in Vietnam (who later fled to China), I was born into a multi-lingual family that spoke Cantonese, Mandarin, Vietnamese and three other Chinese dialects, often all in one sentence. This was not unusual for Chinese in Vietnam. Since I landed in suburban Houston, Texas, and not New York City or San Francisco, the only option for me to learn English was to enroll in English as a Second Language (ESL) class, which I gladly attended once a day. The rest of the time, I understood nothing that was being said around me. It made me timid and insecure, despite having always been a confident kid.

Other than ESL, for the first year I sat through all subjects without learning much. My school had one Asian teacher and she was Japanese. There were also only a handful of bi-lingual Chinese students and one bi-lingual Vietnamese student, all of whom quickly grew tired of being my translator. Because I had no choice but to be fully immersed in an English-only world, I learned the language quickly; which I was very proud of. But it also came at a price. Outside of my home, I had no opportunities to learn Chinese. When my family spoke Chinese in public, people often gave us unfriendly looks. Back then, becoming American meant assimilating quickly, speaking English fluently, and shedding baggage from the old country.

So it is with great joy that I watch these students, both Chinese and non-Chinese, learn a new language without having to abandon their native tongue. With China becoming a global power, it’s no surprise that Chinese is the fastest growing language taught in U.S. schools.

Admission to the dual language program at PS 20 in New York City is based on a lottery, and classes consist of an even mix of English and Chinese speakers. This structure encourages students to learn from each other, and not just from their teachers. At PS 20, only about a third of the students in the program are non-Chinese children. (All Chinese students, whether born here or abroad, are considered ‘Chinese heritage’ students.) This may seem contradictory to the half and half structure, but many Chinese students were born here and are fluent in English, so they may count as English speakers.

While it’s too soon to tell how effective the Mandarin program at PS 20 will be, studies have shown that students in dual language or immersion programs in general score higher on standardized tests than their English-only speaking peers. Additionally, the cognitive demand of a dual language program generally gives bilingual students an early advantage in other disciplines, including math. But timing is also important. The most effective time for a child to learn a language is between pre-kindergarten and fifth grade.

The kindergarten curriculum may not present challenges for most students in either language, but what happens when they get older and studies become harder? How will more rigorous subjects like science be taught in Mandarin? How will non-Chinese heritage students get help with homework if their parents do not know Chinese? Will dual language students be able to keep up academically with other children who are learning only in English? These are a few concerns that some parents have expressed to me. But they also stressed that the potential benefits of the program far outweighs these concerns.

Demand for the dual language program is huge at PS 20, but its future remains uncertain. Much of it depends on funding. The parents’ biggest worry is whether their children will get to continue the program next year.

I sometimes wonder if I would have acquired English as quickly as I did if I had landed in New York’s Chinatown instead of Houston. To fully participate in American life, fluency in English is important. But if America is to continue to be a global leader, we must learn other languages, not just Mandarin, and not always expect everyone else to speak English.

In talking about immigrants in America, President Theodore Roosevelt once said, “We have room for but one language here, and that is the English language.” I couldn’t disagree more.

Lan Trinh is a Feet in Two Worlds education reporting fellow.  Her work, and the work of other Fi2W fellows, is supported by the New York Community Trust and the John S. and James L. Knight Foundation with additional support from the Mertz Gilmore Foundation. 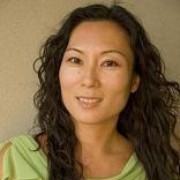 Lan Trinh, reporter, a multi-lingual ethnic Chinese from Vietnam, Lan Trinh fled to China at the age of eight and immigrated to America at ten. Since graduating from NYU in Journalism/Communications, Trinh has been a TV producer and journalist working in entertainment, news and documentaries for network and cable in the U.S. and Asia. Most recently, Trinh was a producer at ABC News in New York City.