In Response To Obama, Bobby Jindal Offers His Own Immigrant Story 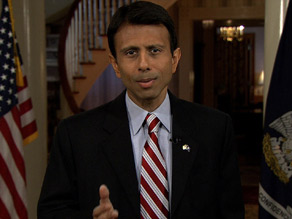 Anchoring his message in his family’s immigrant story, Louisiana Gov. Bobby Jindal last night was launched into the national political arena as one of the Republican Party’s rising stars. As the party itself tries to relaunch its image following its losses in the November election, Jindal, whose parents immigrated from India when his mother was pregnant with him, is a striking new spokesman for the GOP.

The Louisiana governor was in charge of delivering the Republican response to President Barack Obama’s address to a joint session of Congress, giving him a national platform for the first time. In what Republicans probably had hoped would be a repeat of the Obama success story at the Democratic National Convention of 2004, Jindal had been scheduled to speak at the Republican National Convention last year — but had to cancel because of Hurricane Gustav’s threat to his state.

Last night, Jindal started his speech acknowledging the historic quality of Obama’s election and then narrated part of his family’s immigration story. [Read the transcript at CNN.]

“Like the president’s father, my own parents came to this country from a distant land. When they arrived in Baton Rouge, my mother was already four and a half months pregnant…,” he said. “To find work, my dad picked up the yellow pages and started calling local businesses. Even after landing a job, he could still not afford to pay for my delivery, so he worked out an installment plan with the doctor. Fortunately for me, he never missed a payment.”

As I grew up, my mom and dad taught me the values that attracted them to this country, and they instilled in me an immigrant’s wonder at the greatness of America.

As a child, I remember going to the grocery store with my dad. Growing up in India, he had seen extreme poverty. And as we walked through the aisles, looking at the endless variety on the shelves, he would tell me: “Bobby, Americans can do anything.”

I still believe that to this day: Americans can do anything. When we pull together, there is no challenge we can’t overcome.

Jindal is seen by some Republicans as “a party savior and a promising presidential challenger in 2012,” Sasha Issenberg of The Boston Globe writes today. Issenberg quotes Republican strategist Phil Musser saying, “Bobby Jindal represents everything that’s great about the American dream, the American story, and what it means to put Republican ideas into action.”

Although the 37-year-old governor has said he will run for reelection in 2011, and not for president in 2012, “his out-of-state fundraisers and speeches have raised suspicion among his constituents,” the Los Angeles Times reports.

He is now on virtually everyone’s short list of top contenders for the Republican presidential nomination in 2012, which, if he were to prevail, would set up an extraordinary general election contest between two nonwhite men, one 51, and the other 41.

If so, Tuesday night’s speech may be remembered as the occasion when the two first went head-to-head. In that context, the Republican Party’s choice of Jindal to respond to Obama’s first address before a joint session of Congress, was at once bold and obvious.

Still, Politico reports, many critics did not like Jindal’s performance at all. “Sing-songy,” “childish,” “hurried,” “hackneyed,” “wooden,” “unserious,” “condescending,” were some of the adjectives used.

But Jindal can afford to be patient. As John J. Pitney Jr., a political science professor at California’s Claremont McKenna College, told Politico: “Fortunately he has a lot of time to improve his delivery. In the year 2040 he will still be younger than McCain was in 2008.”

Use this button to share this story on social networks or to send it by email.