When Maria del Carmen Martinez was 10 years old, her uncle gave her a goat. In Miami, it’s not uncommon to see backyard goats, especially in immigrant neighborhoods. Wilhelm – as the goat was called — lived with Martinez’s family outside their southwest Miami home until he started tap-dancing on the neighbor’s car. The family ultimately had to give him away.

Martinez never forgot Wilhelm, and as an adult she has continued to work with goats whenever she has a chance. She’s even rescued one that she spied strolling down a city street.

“I stopped the car and shoved him in my back seat,” she recalls. “I have no idea where he came from or where he was going. He had probably escaped from someone’s yard.”

In Miami, where two-thirds of the population is Latino and there is also a large West Indian community, goats are a source of both milk and meat. You need only visit the city’s Cuban, Jamaican, Haitian, or Dominican restaurants to see that everyone loves goat– from Haitian tassot to Jamaican and Trinidadian curry goat and even Dominican chivo guisado (goat stew).

In countryside regions of the Caribbean islands, keeping a goat (or its lookalike, the Barbados Blackbelly sheep) represents self-reliance. Although they vary by breed, the average, full-grown goat weighs about one-tenth that of the average cow and takes up a modicum of space in both pastures and barns. Goats don’t produce as much milk per animal as cows, but goat’s milk is nutritious and can be turned into cheese, yogurt and soap.

During times of hardship, having even a single farm animal on the premises can ensure survival among island communities. In Miami, space is limited and money is often just as hard to come by as it is on the islands. “But that’s where the goat can come in handy,” Martinez says. “You can raise it in a parking lot.” A doe can be milked, and a buck (a mature male) can be rented out as a stud for insemination purposes.

For Cubans and other Latinos who have put down new roots in south Miami-Dade County and the farmland regions of Homestead and Redland, rearing goats can be a way to make a living or feed a family. Immigrants and native-born Americans alike raise goats on five-acre farms in these areas to sell raw milk; make cheese, yogurt and soap; and breed kids.

Goats are also a symbol of personal freedom, a nod to nostalgia, and a celebration of ethnicity and culture.

“[Curry goat] is a dish that was introduced to the Jamaican palate by our Indian community after the abolition of slavery and it has remained a favorite,” says Malachi Smith, a Jamaican poet and writer who lives in Miami. “We purchase curry goat regularly for lunch and dinner at Jamaican restaurants in [South Florida]. For major festivities and family get-togethers, curry goat is a must.” He adds that, “the goat is usually purchased from Cuban farms in the West Okeechobee Road area of Miami-Dade County.”

Those who are interested in using locally-sourced goat products, outside of basic products readily available in most grocery stores, are often forced to raise their own.  That’s because, “the market structure and infrastructure currently available to cattle, poultry, and swine producers have not been developed for goat producers,” says a 2013 article from eXtension.org.

Imported goat products may be available, but they’re often too expensive for “nontraditional, “new” immigrants, and “ethnic groups.” Hani Khouri, a Lebanese chef who produces Chevre, Feta and Halloumi cheeses from his herd of Nubian goats, exclusively distributes his products through a regional Community-Supported Agriculture group rather than sell them retail.

This lack of availability is why Raymond Ceballos, who relocated from Camagüey, the third largest city in Cuba, in 1978, has been raising his own Nubians for the past 10 years on his plot in Homestead. A plumbing contractor by day, he keeps goats for both milk and meat, and even butchers them himself. “The most important thing,” he confides, “is to clean the meat and take away all the fat. The fat is what causes the smell.”

Ceballos doesn’t raise goats just to feed his family. “I like them,” he says simply. “I grew up with goats in Cuba, even though we lived in a city.”

Goats generally don’t do well in cities. In Miami, it’s illegal to have a goat in a residential single-family district.  Goat-owners themselves aren’t always in the country legally, and if the goats are discovered, their keepers will be, too.

(Trying to find backyard goat owners to go on the record without fear of reprisal for this story was a months-long process.)

Some keep goats only temporarily for religious rituals that are protected by the Supreme Court but opposed by animal rights activists, who would be more than happy to send a goat into the street rather than see it sacrificed.

Goats also have a tendency to wander. It’s a disincentive for Martinez who longs to install a kid again in her backyard, for both practical and sentimental reasons.  “I was raised on goat’s milk,” she says. “My mother used to buy it from the local bodegas.”

As a result, many owners eventually abandon their goats or give them away, as Ray Chasser of Earth-N-Us Farm, a two-acre plot located in the center of Miami’s busy Little Haiti, has learned. A vegan, Chasser pens and feeds 11 goats that might have met unfortunate ends if he hadn’t rescued them.

The goat’s reputation for surviving on bare essentials is well deserved. But the
idea that they are easily pastured in limited space and make terrific pets might be more of a myth, according to Victoria Barnes. An American-born homesteader who lives in an immigrant neighborhood, she is passionately focused on sustainability as a way of life.

“There’s a learning curve. You can actually lose them really easily,” she says. “They frequently get parasites and have all sorts of digestive problems.”

Ceballos adds that goats “don’t like humidity. They can get too hot, and you have to feed them right.” Ceballos grows his own grain to feed his flock.  But for him, the extra work is worth the pleasure of being able to eat his favorite goat dish: fricase de chivo. 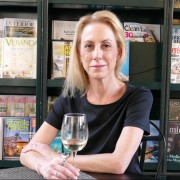 Jen Karetnick is a Miami-based writer and author of 14 books, including the cookbook Mango (University Press of Florida, 2014). Her work has appeared or is forthcoming in publications including TheAtlantic.com, FSR Magazine, MentalFloss.com, Miami Herald, Southern Living, Today.com, USA Today and Virgin Atlantic Airlines.

A Nigerian Mom and Her Son Explore Tradition and Nutrition