My Hijab, My Body – The Journey of a Tattooed Yemeni Feminist: The Fi2W Podcast

“I’m the one that’s struggling to live between two worlds, people think I have two identities, I don’t. You compromise.”

A young woman leaves her family’s home in Brooklyn every morning wearing a hijab around her head and an abaya, a floor-length dress intended to protect her modesty as a Muslim woman.  But when she gets to the subway, she makes the switch.

She arrives at her job in Manhattan with her head uncovered.

“When I first took [the hijab] off, I felt it was such an elaborate performance, but after two or three months, I’m so quick with it, I’m like a little ninja, you’ll be shocked how fast I do it, I remember a woman looked at me and was like ‘did I just see this girl?'”

Reporter Tahini Rahman produced our story about how a young Muslim woman struggles to reconcile being the person she wants to be and the woman her parents want her to be.

Listen to Her Story

Listen to our recent podcast I Feel Like I’m Home. 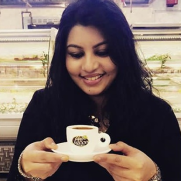 Tahini is a third culture kid, foodie, and a recent New School grad. While at The New School, she pursued her MS in Nonprofit Management, focusing on youth and women empowerment, and specifically, gender issues. She has lived in 5 different continents and has a passion for learning languages and discovering the top “foodie” places in New York, around the US, and the world.

Is it Safe Here? - Redefining Sanctuary in the Trump Era