On Day One, Following Deferred Action on Social Media and Blogs

Today is day one of the Deferred Action for Childhood Arrivals program or #DACA. (Photo: Flickr/neighborhoodcenters)

The deferred action application forms went up online Tuesday and the reaction on social media among DREAMers has been ecstatic. The forms may not work on all PDF readers though, so if it’s not opening don’t fret, update your software or try the library. DREAM activists have accomplished a lot through savvy use of social media. Right now, the best Twitter hashtag to watch for information on deferred action is #DACA, short for Deferred Action for Childhood Arrivals. #DREAMers and #DREAMact are also getting play. 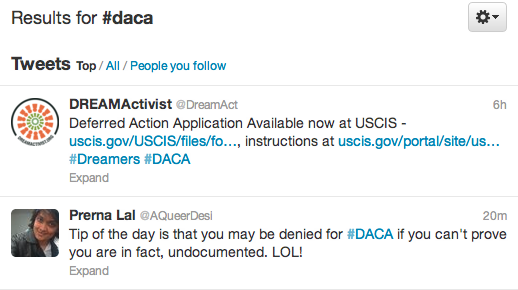 Congresswoman Lucille Roybal-Allard (D-CA) is advertising a Twitter Q&A with members of the @HispanicCaucus at 2:30 PM Wednesday using the hashtag #Deferred

Some useful people to follow on Twitter are Congressman Luis Gutierrez (D-Il) @luisgutierrez and David Leopold @davidleopold an immigration lawyer and activist.

Hiding in the shadows left us vulnerable; coming out into the light makes us strong and protects us. By standing together, we will ensure that the young people who sign up for deferred action will be politically bulletproof. Any future President or Secretary of Homeland Security will have one hell of a fight on their hands if they try to deport this contingent of DREAM-eligible youth en masse.

David Leopold on his blog davidleopold.net has put up a summary of yesterday’s conference call between USCIS director Alejandro Mayorkas and stakeholders:

Many potential applicants are concerned about how they’ll pay the $465 fee. One of them, Juniper Sunshine writes on Tumblr:

So it looks like I’ve gathered the breadth of my documents for the 15th.

I have no idea how I’m gonna pay off the $465, but I suppose that part I can figure out later. I have literally no idea how this is all going to work, and I’d be lying if I didn’t say I was a little scared, because I am. I just really hope I can get my work permit, and of course, my driver’s license soon. I just want to lead a normal life.

Some Republicans in Congress like Rep. Lamar Smith (R-TX) are claiming that the program will cost taxpayers money. Not at all says LA Times opinion writer Sandra Hernandez. In fact, she argues deferred action will probably make money:

The agency that handles all immigration related visas and applications is self-funded, and has been since 1986. In fact, the bulk of U.S. Citizenship and Customs’ budget comes from fees paid by immigrants. For example, in fiscal 2011 nearly $2.4 billion of the agency’s $2.8 billion budget was financed through fee revenue, according to congressional testimony.

Gearing Up for Deferred Action

Crowds of DREAMers - Undocumented Immigrant Youth - Get Legal Counseling as We Ask "What's Next?"