Sumeyye and Safiye Sideli left Turkey for New York so that they could attend school while wearing headscarves. (Photo: Necla Demirci)

For many years Turkey has banned female students from wearing the headscarf – or hijab – in universities.  To get around the ban, some Muslim girls and young women have left Turkey to attend high school and college in the U.S. and other countries where they are permitted to cover their heads in the classroom.  Despite anti-Muslim sentiment in the post-9/11 era, many female Turkish students consider the U.S. more accepting of their religious practice than their native country.

In this podcast, Turkish television journalist Necla Demirci tells the story of two sisters, Sumeyye and Safiye Sideli, who came to New York as teenagers to complete their education.   In her conversation with Fi2W Executive Producer John Rudolph, Demirci also speaks with Mucahit Bilici, assistant professor of sociology at John Jay College, who studies Islam in America.

Necla Demirci is a Fi2W education reporting fellow.  Her work, and the work of other Fi2W fellows, is supported by the New York Community Trust and the John S. and James L. Knight Foundation with additional support from the Mertz Gilmore Foundation. 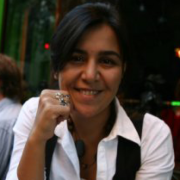 Necla Demirci is a former Feet in 2 Worlds contributor. She is a freelance Turkish television journalist, currently based in New York City. She produces short documentaries and news pieces for various Turkish-American news outlets. Her latest piece on Turkish student pedicab drivers won second place in the video category at the 2011 Ippies Awards in New York City. She was an associate producer-writer for TRT International ( Turkish Government TV) in New York, has reported for a number of newspapers and has worked as a media consultant for several companies in Istanbul, Turkey. She is now pursuing her masters degree in Communication Arts at New York Institute of Technology.

Where Immigration Laws are Made Today - State Capitols and Federal Courts