It was easier with Gandhi. Now that’s a movie a country and its people can love, wrap their arms around, and shout praise to. Love, peace, and Satyagraha (nonviolent resistance) — they roll off the tongue with an easy lilt that represents the best of what India has to offer.

Not the case with Slumdog Millionaire. There’s the ambiguity. What does it mean? There’s the connotation. The only other compound word that begins with “slum” and easily comes to mind is slumlord. It doesn’t quite inspire you to go out and change the world. 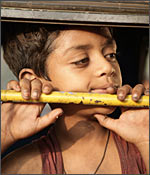 A scene from Slumdog Millionaire

On the surface it appears that India is celebrating the success of Slumdog Millionaire, the unlikely independent, low-budget film that swept the Oscars. Thousands crowded the airport in Mumbai to greet the cast upon their return from the Academy Awards ceremony in Los Angeles. The evening news in the U.S. beamed back images of the film’s youngest stars riding the shoulders of the crowd, their small hands clutching golden statuettes to shouts of “Jai Ho,” the title of A.R. Rahman’s Oscar-winning song from the movie.

But the post-Oscar celebrations and the Western embrace of Slumdog Millionaire mask a heated debate over the movie among Indians around the world.

Listserves for Indian American groups, such as the South Asian Women’s Collective in New York and South Asian Sisters in San Francisco, are brimming with comments about the film and links to blogs written by amateur and professional writers who either praise or condemn the film’s depictions of corruption and poverty. The South Asian Journalist Association (SAJA) has held four webcasts to date to discuss the implications of the movie and the heated controversy it has generated. Rediff.com, the largest Indian news website, has an entire page dedicated to international coverage of Slumdog.

The arguments range from the right to tell the story – India seen at its worst through British eyes doesn’t help the film’s cause – to charges that the film’s producers and British director Danny Boyle exploited the young children in the movie, plucked them from the slums, paid them little and failed to provide additional compensation when the film shot to global prominence. END_OF_DOCUMENT_TOKEN_TO_BE_REPLACED

The South Asian Journalists Association (SAJA), a New York based organization, is coordinating coverage of the Mumbai terrorist attacks on the Web.

The SAJA web site contains numerous links to blogs, webcasts, twitter feeds, and web sites that are following the unfolding story in the Indian city. Among the stories being covered are the economic, political and security implications of the attack.

SAJA says they will offer updated webcasts about the situation in Mumbai on their site at 10 AM and 10 PM EST on Thursday, November 27.