Democrats and Republicans alike appear to have little stomach to derail the nomination of Tim Geithner, President-elect Obama’s pick for Secretary of Treasury, despite his failure to pay $43,000 in taxes on time, and his hiring of a housekeeper who briefly lacked proper work papers.

Does political dismissal of Geithner’s troubles reflect a change in attitudes toward issues like the hiring of undocumented workers?

Little attention has been given to Geithner’s hiring of the worker, whose legal papers expired while she was employed him. Instead pundits and papers have focused on the irony that the man who will lead the Internal Revenue Service can’t figure out how much he owes in taxes. 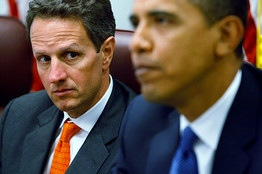 Geithner’s hiring of a housekeeper whose work papers expired should be noted, not as a criticism, but as a reality that the 12 million undocumented immigrants in this country are interwoven in the American workforce.

Geithner isn’t the first public official in this situation. In the presidential primaries, as Republican Mitt Romney campaigned around the country promising to crackdown on undocumented immigrants, the Boston Globe revealed that undocumented workers had been part of the landscaping firm hired by the Romneys.

Two of President Bill Clinton’s nominees for attorney general, Zoe Baird and Kimba Wood, were both disqualified for hiring nannies that were undocumented and for not paying social security taxes on their wages.