“We Were Junk Food Babies” – Challenging Food Insecurity in Detroit

It was a long, hot summer in 1967 as Detroit and other cities became centers of urban unrest. A year later the Kerner Commission, established by President Lyndon Johnson, issued a report that cited institutional racism as the cause, specifically, police brutality against African Americans, and inequities in housing, employment, and education.

At the same time a new organization in Detroit was conducting its own investigation. The group, Focus Hope, found that black shoppers in Detroit paid significantly higher prices for groceries than whites, and the quality of food available in black neighborhoods was inferior to the food in white neighborhoods. More than five decades later, these same conditions continue to exist, and a new generation of young black entrepreneurs is developing new ways to address food insecurity.

Listen to Brittany Hutson’s story, produced as part of the Feet in 2 Worlds Food Journalism Fellowship at WDET.

Read the full story.On a cold, sunny day, Raphael Wright and his business partner, Sonya Greene, check out a vacant building on Detroit’s Westside. Inside, wood panels are on the floor…and dry wall is being placed over exposed brick. The only clue to the building’s past is a sign in front, with the words “liquor, beepers, and check cashing.”

“We got some side improvements that’s needed on the outside, some additional renovations done on the inside. There’s already coolers inside of the building.”

Sonya Greene and Raphael Wright in front of the building where they plan to open their bodega; photo by Brittany Hutson

The Linwood neighborhood remains underdeveloped, with few retail businesses, countless empty lots, and many vacant buildings. But Wright and Greene see potential here. It’s why they’ve chosen this site, at the Linwood/Glendale intersection, to open a bodega…a corner store that sells healthy food. Like other neglected neighborhoods, fresh fruits and vegetables are a luxury in this area. Wright says it’s been that way since he was kid.

“I was raised in the 90s and I always say that we were junk food babies. So we only, we ate our full courses out of liquor stores, gas stations, and many times, fast food restaurants were pretty much our go to places to eat… so, in short, I’m a victim of food insecurity. I’m 30 years old. I was diagnosed with diabetes at 19, so before I was old enough to have a drink, I was diabetic.”

Wright wants his Glendale Mini Mart to be a pilot for a full range grocery store he hopes to open in the future.  The bodega will offer fresh produce, prepared foods, and staple items. It will be part of a larger mixed-use development that will include a barber shop, a beauty salon, and housing.

“This is my opportunity to not only service a community but to show proof of this new fresh concept of how to introduce healthier food access in our communities.”

Wright and Greene are not the first to recognize the importance of Detroit’s black residents having access to fresh, reasonably priced food. That awareness began more than 50 years ago, following the rebellion that rocked the city.

Late July 1967. Hot temperatures and decades of frustration led to five days of civil unrest. It was sparked by racial tensions due to inadequate housing, lack of jobs, poverty, and rampant police brutality. But, there was something else not often discussed… food.

“At this, in this same time period, there was a fairly expansive hunger issue in community.”

Alex Hill is an adjunct professor at Wayne State University. His research on the Rebellion looks at food, power, and race. In many ways it’s the continuation of work that began more than 50 years ago when the non-profit group Focus Hope began studying conditions in Detroit’s black neighborhoods.

Focus: HOPE was founded as a response to the rebellion. It provided education and training to address racism, poverty, and other forms of injustice.

A year after the rebellion Focus: HOPE released a Consumer Survey. To get answers under-cover shoppers were sent to 300 grocery stores in the metro area. The main findings were poor inner-city Detroiters were paying up to 20 percent more for lower quality groceries, and sub-standard service compared to white suburban residents.

“In thinking about those disparities and access, those are still very much real. They may look different, but I’d say they’re, they’re very much the same from 1967.”

Hill says Detroiters travel outside of the city on weekends to larger chain grocers to stock up and use their local grocer for smaller needs such as eggs or milk during the week.

“This is where we keep our dry goods…”

“People like to call Detroit a food desert and it’s not, it’s a somewhat of a misnomer. There’s food in Detroit it’s just kind of hard to get to.”

One of Waller’s partners is Peaches and Greens, a produce market in Detroit’s New Center neighborhood. The store sells pantry items, dry goods, snacks, and other locally made food products.  Fresh Corner works directly with stores like Peaches and Greens. They also work with schools, the YMCA, and senior housing developments as well as do catering.

“So fresh corner had this idea to kind of cut out the middleman and bring fresh food options to places people already go and have easy access to anyways.”

Waller grew up on the Eastside, but went to middle school and high school in Grosse Pointe. While in school, Waller noticed the jarring differences in food access between the two areas.

“The difference between a Kroger in Detroit and the Kroger in Grosse Pointe is laughable. So just seeing the juxtaposition of those two worlds and, and two experiences really inspired me to be like, there, there has to be a solution to this. There has to be an answer in there has to be awareness of, of the inequality in those, in these issues.”

(Sounds outside the building)

Back at the site of the future Glendale Mini Mart, Sonya Greene walks along the front of the building.

Greene is a registered nurse who grew up in Linwood. This property has been in her family for at least 40 years. She bought the building from her family to start the store. She says there’s always been a need in Linwood for healthy food.

“It has to start with, with the education component. So that’s pretty much what this is about is, is teaching with love and understanding and in saying, yeah, we know that you’ve not had an option but we’re here to give you something else to choose from.”

Wright says the bodega is also about representation.

“You know, you’ve seen our grocery stores be not representative of our communities. So putting faces in the community that looked like us, that are from our neighborhoods and understand where we’re going through it makes the education part easier.”

Advocates for better food and health outcomes in Detroit know there’s much more work to be done as the city’s racial and economic history continues to influence the quality, price and variety of foods available to many city residents.  Wright, Greene and Waller are aware of what they are up against…barriers– ranging from poor transportation and affordability to a lack of proper education about healthy eating. Like many in Detroit they envision a day when black-owned businesses will provide a wide variety of healthy foods to shoppers in the city.  It’s still a dream, but close enough to being realized they can almost taste it. 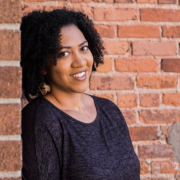 Brittany Hutson is a Feet in 2 Worlds Food Journalism Fellow at WDET.

Video: What Is Detroit-Style Pizza Anyway?